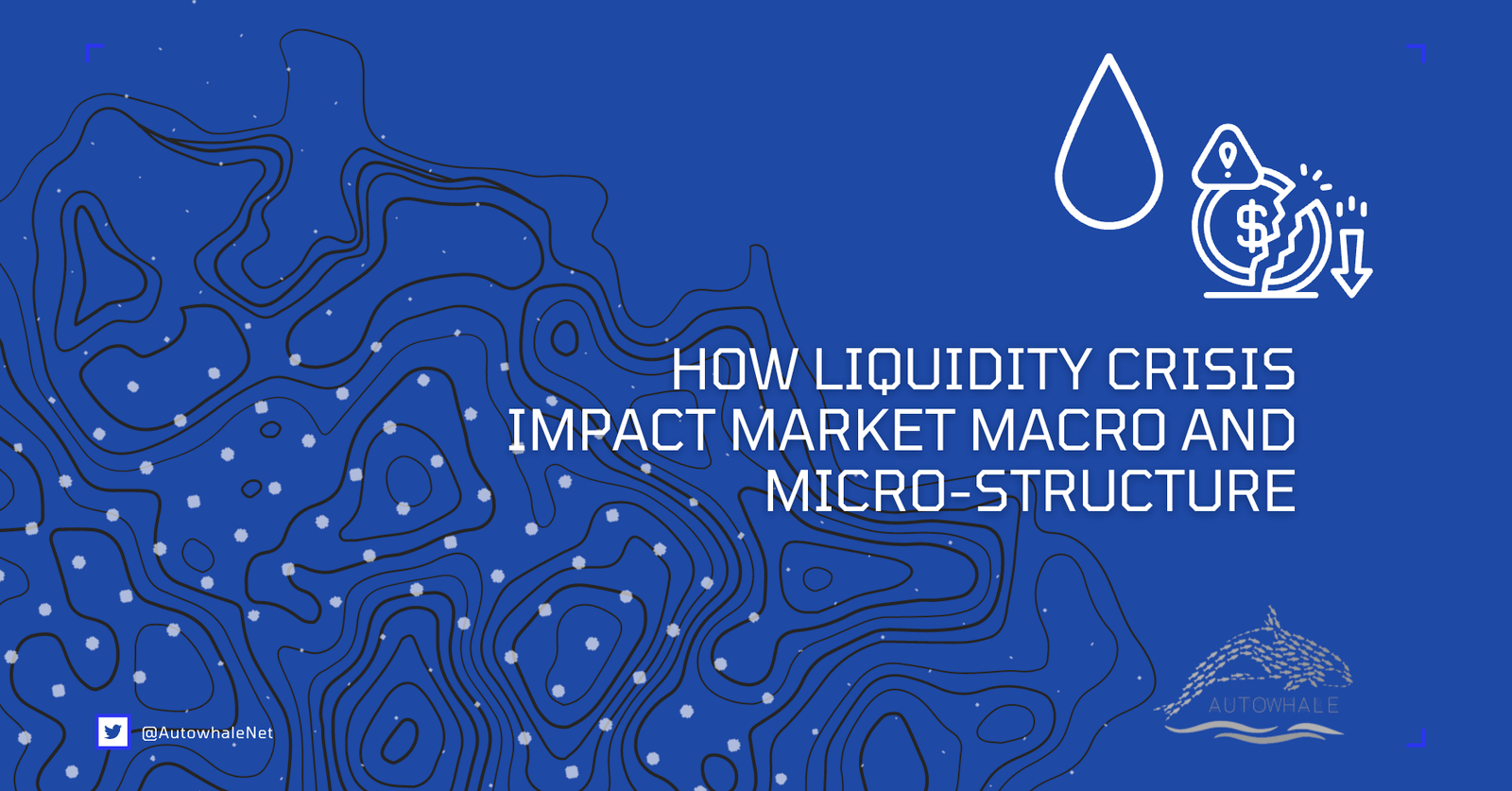 Liquidity crisis correlate with uncertainty, generally speaking. In times of macro uncertainty liquidity dries up on overall markets causing higher volatility, often led to the downside. In this article we will look both from a macro-perspective and a market microstructure perspective on the aspects of liquidity shortages.

What happens in a liquidity crisis?

Generally, liquidity crisis happen often. Dramatic events such as in 2008s financial crisis, the stock market flash crash, 2020s COVID crash or 2022s Ukraine-Russia war and FED-rate hikes impacted sell-offs that were noticed outside of market participants but by the general population with mainstream media reports, increases in prices or shortages in goods.
However, these events happen on a daily basis on an individual asset level. Cancellations as well as announcements of major contracts can cause buy respectively sell-side liquidity shortage in public equities, massive money printing may result in buy-side liquidity shortage in national currency markets (see Venezuela) or embargoes on certain commodities can impact markets and their liquidity.

Ultimately, understanding that such events always have some driving factors and go hand-in-hand with uncertainty is key.

On a macro level liquidity crisis are mostly narrative drive. Examples such as the ones mentioned above (rate hikes, wars, etc.) are typical for an overall liquidity shortages where liquidity typically shifts from rink-on to risk-off assets. Hence, such situation are driven by some fundamental factor that drives investors and institutions withdrawing their liquidity from markets.
Liquidity declines not only happen in public markets, however, but also in e.g. private equity markets. An example of such would be the Evergrande situation that recently appeared on investors radar as news came out that the real estate giant in China had to default some of its obligations.

Looking on liquidity crisis from a market microstructure perspective

Reductions in liquidity are not always leading to higher volatility or have some outsized impact on markets. In traditional public equity markets traders who are trading near closing hours often face lower liquidity as investors take off capital from the market. In crypto markets, often momentum is driven by a certain geographic region.

To make the connection to the macro-structure, big changes in liquidity that are news caused, directly manifest in markets microstructure. According to Efficient Market Hypothesis (EMH), any public information and knowledge is priced into the markets and therefore trader who are acting solely based on microstructure will naturally adopt to that changing market regime and indirectly trade based on changing fundamentals – even if they don’t directly react to it.

Historically Asian (especially Chinese) market participants were driving prices. Hence an increase in trading activity and liquidity was recorded during daytime in Asia. Conversely a reduction in liquidity could be seen when at night.

Just recently with a shift more from Asia to the US markets, crypto markets have seen a shift towards US trading hours, as well as an increase in correlation to major risk-on indexes and equites such as the NASDAQ.
On the market microstructure level, liquidity crisis manifest themselves as a result of a dry off of either or both buy or sell side limit oder liquidity supply. Larger price swings are a result if market order incoming frequency doesn’t decrease more or equally.

Typically in liquidity shortages, uncertainty is not only visible on a macro level but also on a market microstructure level, which results into an increase of liquidity taking order (market orders) in contrast to liquidity providing orders (limit orders)

There are multiple ways to measure such phenomenas. An approach used by Autowhale, a crypto market making company, is to leverage order-flow imbalances as well as the arrival frequency of such orders. Changes in the rates of change tell a story about the order of magnitude in liquidity changes.
Market Makers as liquidity providers prepare themselves for such events by hedging with derivatives while mostly staying delta neutral. Hence, they don’t have a bias in the market.

Liquidity crisis on an individual basis are witnessed daily in crypto markets where asset issuers rug pull and remove all liquidity form their markets making their tokens worthless. This happening on decentralized exchanges (DEXes) that are not as traditional markets based on limit order-books, but on liquidity pools and a quote-based market. On more serious crypto asset markets, however, liquidity and liquidity shortages underly the same dynamics and causes as traditional public markets.

Recovery from declining in liquidity

In any of the events described above, markets tend to find their way back into an equilibrium. Capital that has been pulled off of markets in these events, wants to get re-deployed once certainty is regained in markets. When that happens markets re-bound to a level somewhere in between the starting point of the crisis and the local low of the crash/pump. In quantitative finance, the resiliency and the speed at which a market regains its strength is a measure for the health and maturity of the market.

The amount of professionalism, institutions or market makers acting on a market are the biggest driving factors of market resiliency. Conversely, mostly retail driven markets are traditionally harder impacted by such crisis and have a harder time coming back and regaining strength.

Ultimately, events of liquidity shortages is always caused by some kind of abnormal market event or dynamic. That may be news or fundamentally driven or driven by market microstructure based traders. In both cases, markets become irrational and tend to overreact which is why there are re-bounds and recoveries back some sort of market equilibrium.

None of the content above is financial advise and is for educational purposes only. Find more content on algorithmic trading software, crypto market making and market microstructure on Autowhale’s blog.

Thomas Pratter is the CEO & Founder of Autowhale. He has been working in the crypto and algorithmic trading space for several years engaging with exchanges, token projects and infrastructure providers from around the globe. He has founded Autowhale on his mission to bring innovative trading solutions to the crypto space and share insights and content in his blog on Autowhale.

Read more in the Autowhale Blog

More From This Category 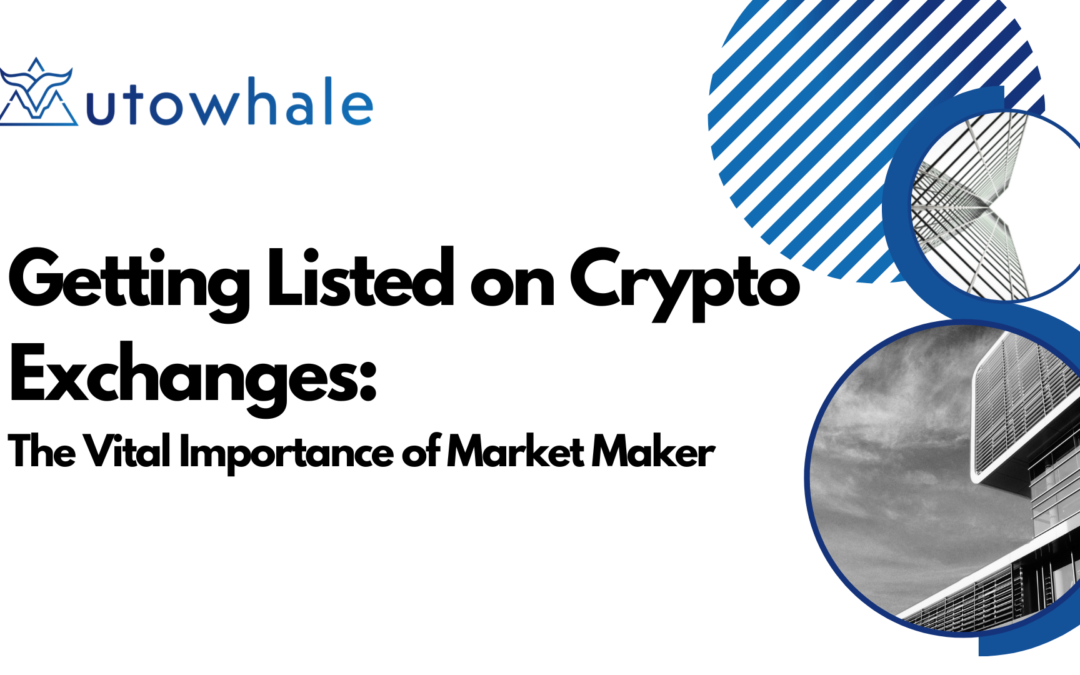